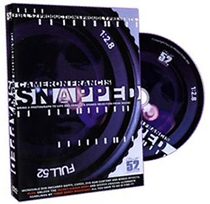 You begin by removing a photograph of four Aces – your ‘lucky’ Aces – and having it examined. A card is selected and signed before being buried back into the middle of the deck. You explain that the photo will reveal the suit of the selection. You give it a shake and the Ace of Hearts visibly turns face down in the picture! You proceed by PULLING A FULL SIZED PLAYING CARD OUT OF THE PHOTO leaving an empty space where it once was! The card is placed on a spectator’s hand. You snap your fingers over it and the card is revealed to be the signed selection. This super commercial, off-beat effect is easy to do and VISUALLY STUNNING! Your spectators just won’t know what’s hit them!

The DVD features a ‘secret hidden menu’ – if you can find it, you’ll unlock yet more content and access three different approaches to ‘Snapped’ by Iain Moran, Stephen Tucker & Dave Forrest.